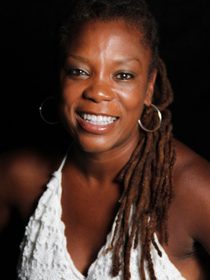 Robin Gee, Associate Professor of Dance at UNCG, holds an MFA in Choreography and Performance from Sarah Lawrence College and specializes in African dance techniques, Caribbean dance forms, and modern dance techniques. Ms. Gee has performed with several New York-based dance companies, including Les Ballet Bagata, directed by Yousouff Koumbassa; Maimouna Keita Dance Company, directed by Marie Basse Wiles; and the Cinque Folkloric Dance Company, where she served as choreographer and Artistic Director for 15 years. She is the recipient of the West African Research Association’s Post Doctoral Fellowship in African Research and the Central Piedmont Regional Artists Hub Grant in 2005 for her work on dance documentation in Guinea, West Africa, the American Association of University Women’s Postdoctoral Research Fellowship for her work on The Mande Lagacy – A Multimedia Dance Documentation Project. She is most recently the recipient of the Fulbright Scholars Award for her work on Urban Griots: R(e) Imaginaing the Word, studying griot cultures in Mali and Burkina Faso. Her choreographic credits include works developed on both student and professional artists.  She has co-directed and choreographed a production of For Colored Girls Who Have Considered Suicide When the Rainbow is Enuf by Ntozake Shange, with Tom Humphreys; Death and the King’s Horseman by Wole Soyinke, with Alan Cooke; and choreographed Evil Dead: The Musical by George Reinblatt, with Jim Wren, Alice adapted and directed by Jim Wren and lastly Caroline or Change, by Tony Kushner, directed by Jim Fischer. She is currently working on a collaborative production for fall 2017 at Revolution Mills with funds provided by the NC Choreographers Fellowship