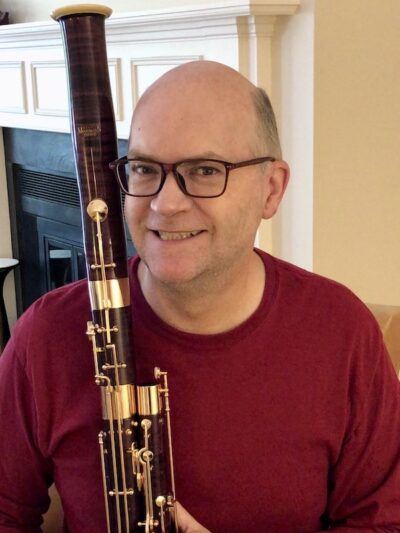 An active performer, Burns enjoys roles as a soloist, in chamber groups, and orchestrally with numerous recent performances at International Double Reed Society conventions, recitals and masterclasses throughout North America, Germany, Italy, China and the South Pacific. He performs as principal bassoon with the Asheville Symphony and the North Carolina Opera and as bassoonist in the EastWind Ensemble and Blue Mountain Forecast. He also performs regularly with regional groups such as the Greensboro, Charlotte, and North Carolina Symphonies and as a guest with the Ciompi Quartet and Mallarme Chamber Players.

He has recorded for the Centaur, CAP, Telarc, EMI, Klavier, and Mark labels and his solo CD Primavera: Music for Bassoon and Piano by Bassoonists, was released to critical acclaim on the Mark Masters label. A new CD Glass Ghosts is scheduled for release in 2020. He performed extensively with the Cincinnati and New Zealand Symphony Orchestras, the Indianapolis Chamber Orchestra, and he held Principal positions with the Cincinnati Chamber Orchestra and the Midland/Odessa, Richmond, and Abilene Symphonies. Burns plays on a Moosmann 222CL 5SC Thin Wall bassoon.

Burns’ primary position is as Professor of bassoon at the University of North Carolina at Greensboro. In summers, he has been associated with several Festivals including the Clazz International Music Festival in Tuscany, Italy, Eastern Music Festival, The Summer Bassoon Extravaganza, Music for All/Bands of America Summer Symposium, the Affetti Festival, New England Music Camp and the Bocal Majority and Operation O.B.O.E. Prior to accepting the position at UNCG, he also taught at the Cincinnati College-Conservatory, Indiana State University and Midland College.

He is an active composer with many of his pieces being published by TrevCo Music, Potenza Music and Effiny Music and frequently performed internationally. Additionally, he has published articles and reviews in the Double Reed (the journal of the International Double Reed Society), the TBA Journal (Texas Bandmasters’ Association), the NC Music Educator (journal of the NC Music Educators’ Association for which he served as Woodwind Notes Editor for over a decade), and Notes (the journal of the Music Library Association). His mentors include William Winstead, Sherman Walt, Leonard Sharrow, Sidney Rosenberg, and Colin Hemmingsen. He is archivist for the International Double Reed Society and was co-host for the IDRS 2003 Conference in Greensboro, NC.