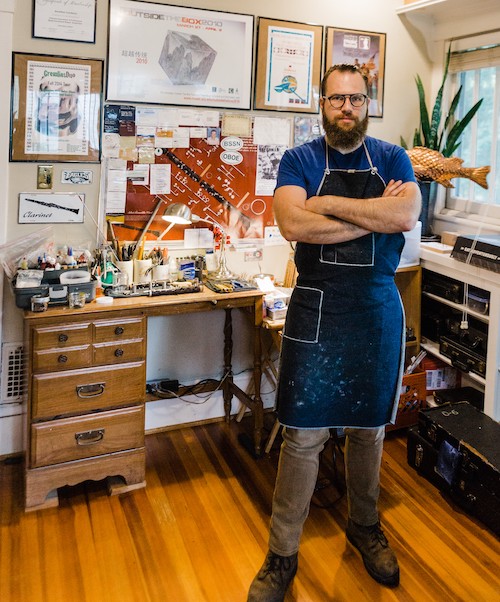 Jon Goodman is the Instrument Repair Technician/Inventory Manager at the University of North Carolina School of Visual and Performing Arts. Jon comes to UNCG from his woodwind repair business, Goodman Customs Woodwinds, where he has experience working with student through professional musicians. Specializing in clarinet repair techniques, Jon has given clinics at Appalachian State University, Duke University, and University of North Carolina at Greenboro among others.

Pivotal to his work as Woodwind Repair Specialist, Jon is also an active performer. Described by Arts Atlanta as having a “musical chemistry that is on target”, Clarinetist and Saxophonist Jonathan Goodman is no stranger to the New Music realm.  He has stayed active as a new music chamber player playing for various groups across the United States, including Atlanta-based GremlinsDuo and Chicago-based Wei Zhongle, as well as having performed at the International Clarinet Association’s Conference in 2014. Jon has also stayed active in the classical world performing with the New Chicago Chamber Orchestra (as a part of the Southern Illinois Music Festival), the Winston-Salem Symphony, Western Piedmont Symphony, and the Piedmont Wind Symphony. Jon still actively gigs in the triad.

Originally from Syracuse, NY, Jonathan resides in Greensboro, NC, where he is an active crossfitter and trail runner. His primary clarinet teachers include Norbert Buskey, Raphael Sanders, and Eric Mandat. He received his Bachelors of Music from the Crane School of Music at SUNY Potsdam and his Masters of Music from Southern Illinois University at Carbondale.