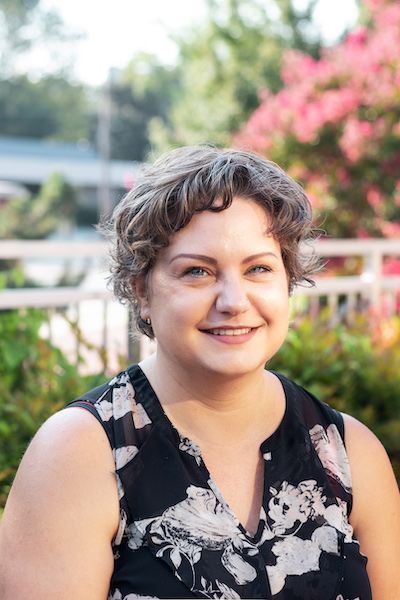 Jehann Gilman is Wigs, Hair and Make-up Lecturer for UNCG. Jehann received her MFA in Wig and Make-up Design from the University of North Carolina School of the Arts in 2007. Upon leaving UNCSA, she spent some time traveling from coast to coast and north to south in the continental United States, looking to gain professional experience in a wide variety of places including Sarasota Opera and the Utah Shakespearean Festival. In 2008, Jehann was hired as the Wig Master at South Coast Repertory Theatre in Costa Mesa, CA. Four years later, she took the leap to being the Wig and Make-up Supervisor at Actors Theatre of Louisville in Louisville, KY. Both of these theaters gave her the opportunity to meet and work with a wide variety of directors, performers, and costume designers on everything from Shakespeare to modern musicals to Theatre for Young Audiences productions. As a result of this incredible variety, Jehann has been fortunate to do everything from making and fitting false teeth, creating foam-latex and silicone prosthetics, sculpting and creating pros-aide transfer scars, teaching how to create period makeup and hair looks to creating realistic and beautiful wigs for both period and modern theatrical productions, and even the occasional hair piece for film. Her personal favorites include making a severed head for Actors Theatre of Louisville’s production of MacBeth, and making several wigs completely out of feathers for South Coast Repertory’s production of Lucky Duck. After 7 amazing years at Actors Theatre of Louisville, Jehann decided to get back to her operatic make-up artist roots. She quickly realized that the thing she missed most was teaching others how to do hair and make-up work. This led to her arrival at UNCG, where she can actively encourage students to embrace the hair and makeup world and give them another avenue into making high quality professional theatre.