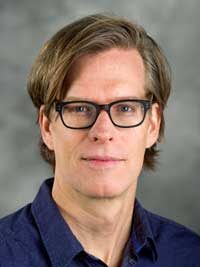 Gavin Douglas holds a BMUS degree (performance classical guitar) and a BA degree (philosophy) from Queen’s University (Canada), a MM (ethnomusicology) from the University of Texas at Austin and a PhD (ethnomusicology) from the University of Washington, Seattle. He joined the UNCG School of Music, Theatre and Dance in 2002. His research interests include nationalism, politics, globalization and cross-cultural aesthetics with a primary focus on Myanmar. His writings can be found in Ethnomusicology, The New Grove Dictionary of Music and Musicians, The World of Music, The Encyclopedia of Popular Music of the World, Anthropology Today, The Chinese Journal of Ritual, Theater and Folklore, Burma at the Turn of the 21st Century and elsewhere. He is author of Music in Mainland Southeast Asia (Oxford University Press, 2010), a text that explores diversity, political trauma and globalization across Burma, Thailand, Cambodia and Vietnam. Douglas’ ongoing fieldwork in Myanmar (Burma) focuses on the state patronage of traditional music, ethnic minority traditions, and the soundscapes of Theravada Buddhism.