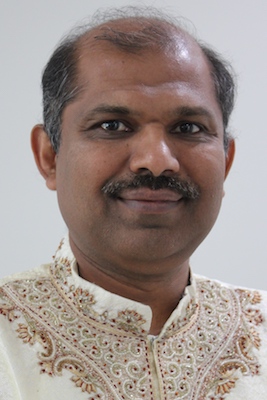 “Maihar Gharana” is a huge tree, and Gaurang through his concert performances represents one of its richest branch; the lineage of late Pandit Dr. Laxmikant Doshi. Born in Rajkot, India, Gaurang has learned from his father and Guru Dr. Laxmikant Doshi since he was 8 years old (late 1970’s) and continued learning for more than 30 years. Gaurang has done his bachelors in Tabla with a clear intention of playing the Sarod. Gaurang initially learned the Sitar and has also completed his “Sangeet Visharad” (6 years of study) with the Sarod. After coming first in “Omkarnath Sangeet Contest” he has played in several major concerts in India, U.K. and USA. His audio CD albums “Evening Melodies” and “Flowers from the Maestro’s bouquet” have received excellent response. Gaurang successfully expresses the richness of the Raag through his gradual expansion of the Raag and demonstrates his control over the rhythm through his melodious Gat’s, & electrifying Taans and Jhala. Gaurang tries to pass on the rich heritage gifted to him by his Guru and father and other senior musicians of the “Maihar Gharana” by teaching Sarod, Sitar, Tabla & Indian Classical Music in Pfafftown – Winston Salem area since 2006 and provides master lessons and lecture demonstrations in Universities. He has given Radio & TV interviews on All India Radio (India’s National Radio Broadcast). 88.5 WFDD N.P.R., USA and Fox8 WGHP. Gaurang has authored the book “Understanding Indian Classical Music” which is used as a text book at UNCG. Gaurang has a diverse student base involving students from several states in the USA.

Gaurang and Dr. Doshi always made it clear that they were never, and are NOT entertainers. For them, their music is an age old sacred tradition, and is equivalent to any other branches of study. If their music did not receive the attention it rightfully deserved, they did not perform. Apart from being born in a musical family, Gaurang has done his post graduation in Computer Engineering and is a USA Citizen working at CPCC Charlotte (Information Technology) & UNCG Greensboro (Music Department). Gaurang is a performing artist, educator, composer, and author living in Pfafftown, NC. Details about his work can be seen on his website www.SarodSitar.com or www.GaurangDoshi.com.