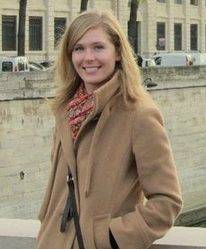 Emily Voelker is a historian of nineteenth-century art and the history of photography, whose work centers on transatlantic exhibition culture, Indigenous representation, and changing meanings and uses of the archive over time.

Her current book project, “Plains Indian Portraiture in Paris,” examines photographs of Northern Plains sitters either sent to, or made at, Parisian exhibitions in the closing decades of the nineteenth century. Focusing on the Lakota (Oglala) and Omaha, the manuscript contextualizes this exchange in the long preexisting entanglements between these Native nations and the French and traces the re-appropriated meaning of these pictures in their communities today. Her articles appear in the Benezit Dictionary of Artists Online, Opening the Album of the World–Photographs 1842–1896, Transatlantica, and Panorama: Journal of the Association of Historians of American Art.