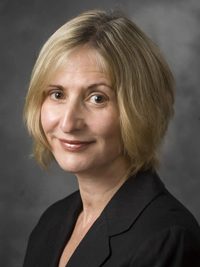 Deborah Bell, a professor at University of North Carolina at Greensboro, has designed costumes for musicals, opera, and theatre productions for over three decades. Her off-campus designs have been seen at Twin City Stage, Triad Stage, Seaside Music Theatre, University of Alabama-Birmingham, TheatreFest, Western Stage, and Colorado Shakespeare Festival. A member of United Scenic Artists since 1978, she has exhibited in Italy, Czech Republic, and several cities in the United States. She frequently designs costumes for Triad Stage. She has also lectured at universities in Korea, Japan, Italy, and the United States and served as Marshall University’s Joan C. Edwards Distinguished Professor.

She received ACTF’s 2005 Faculty Recognition Award, the Southeast USITT Founders’ Award for Outstanding Educator in 1998, a USITT-Southeast Faculty Costume Design Award for Death and the King’s Horseman, and the 2006 Herbert D. Greggs Award for her article, The Mask Maker’s Magic. Her book, Mask Makers and Their Craft: An Illustrated Worldwide Study (McFarland, 2010-reprinted in 2014), is the culmination of interviews with mask makers in Mexico, Trinidad, Brazil, Canada, Japan, South Korea, Bali, Sweden, Italy, Nigeria, Malawi, and both coasts of the United States. She is the editor of Masquerade: Essays on Tradition and Innovation Worldwide (McFarland, 2015) where it has been a best-seller in the Pop Culture category.