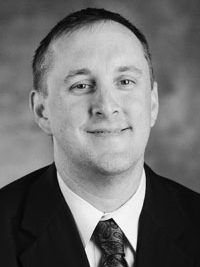 Saxophonist and composer Chad Eby teaches applied jazz saxophone, Jazz Ensemble I, and Jazz History in the Miles Davis Jazz Studies Program at UNCG. He has earned widespread critical acclaim as “a consummate improviser” (Jazz Times), who “has tremendous poise and natural melodic sense” Ottawa Sun), and whose “tone is boundless, blues-inflected, and wholly satisfying” (AllAboutJazz.com

A highly sought-after arranger, Chad’s professionally commissioned works have been performed or recorded by Bill Charlap with Kurt Elling, Wynton Marsalis with Willie Nelson and Norah Jones, the Columbus Jazz Orchestra, the Dallas Jazz Orchestra, and the L.A. All-Star Big Band. Eby is a clinician for Jazz at Lincoln Center’s Essentially Ellington program, and has been a featured guest artist/clinician at universities across the country.

A Newhall, Iowa native, Chad Eby is a life-long student of music. He began playing clarinet at the age of 11, and began studying the saxophone a year later. He went on to study music at Luther College, completing his degree in Jazz Studies at the University of North Texas. Chad earned his master’s degree in Saxophone Performance from Ohio State University. While in Ohio he released his first album, “Triptych”, gaining critical acclaim fromAllAboutJazz.com

“…there is a movement in jazz that embraces a once taken-for-granted model: modernity thru authenticity. Here is where we find Chad Eby.” – Branford Marsalis

“Chad Eby, a consummate artist, is a superb saxophonist and a highly skilled arranger. He is in the top echelon of the worlds finest musicians.” – Bill Charlap

“I once heard a master musician say ‘if you want to genuinely create, know all the decades’. Chad Eby is one of those musicians who carries all the decades of jazz along as he creates. So much so you’d think he be more stooped over. Rather, we hear him reaching back, standing straight up and moving the musical ball up the field. So refreshing to hear in a time of wandering around the creative process. A pleasure to encounter. A thrill to listen.” Gary Walker – WBGO, New York