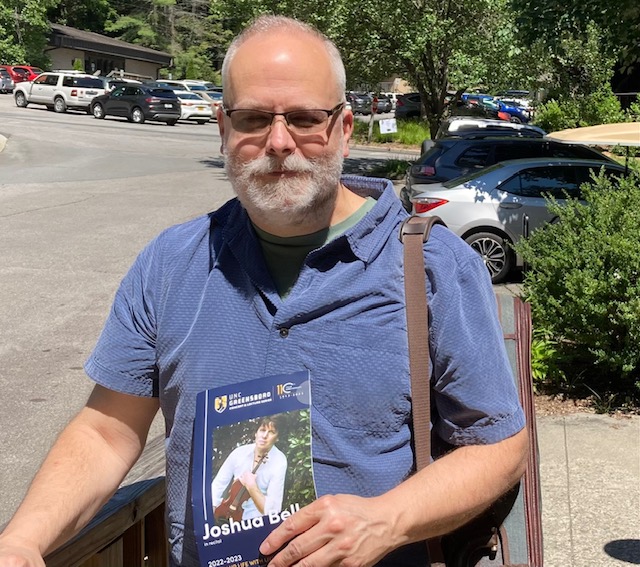 “His playing was something so special.  Really an old soul kind of playing for someone who was so young.  It was no surprise when things took off for him.”

That is what UNCG Viola Professor Scott Rawls thought the first time he heard GRAMMY® Award-winning violinist Joshua Bell—who will perform in recital at UNCG on October 3rd.

Rawls was a freshman at Indiana University.  Bell was in high school but studying at the university with his mentor Josef Gingold, who was considered one of the most influential violin masters in the United States.

“We all went to Gingold’s classes.  We heard Josh play—he must’ve been about 14 at the time—and it was clear to everyone what a huge talent he possessed.”

Professor Gingold wanted the young Bell to play chamber music as part of his training, so a group was formed that included Rawls.

“Along with Josh, the other two members were also pre-college and I was 19, so I was the old man of the group.  Josh still likes to remind me of the age difference, calling me up on my last birthday to ask, ‘Isn’t it time you retired?’ He’s a bit mischievous that way.”

Rawls remembers the mischief and the sheer brilliance of the young violinist.

“He has always been so smart. I remember this time, right after we met. We were going to grab some pizza after rehearsal, so we stopped by my dorm to drop off my viola.  My roommate had this unsolved Rubiks cube sitting on the table. As we’re sitting there talking, I see Josh look at the cube, pick it up, and put it  behind his back. It was just a few minutes later as we were heading out the door when Josh put the completely solved cube down in front of us.  Such a Josh move—laying that cube down so casually, but at the same time being hyper aware of everyone’s reaction, as we wondered how he could possibly have solved that thing behind his back and in such a short amount of time.”

Rawls and Bell played together throughout his time at Indiana.

“There were times that we might have played video games more than rehearsed,” Rawls says with a laugh. “But we did play well together and we became good friends.  Chamber music became a backdrop for our friendship.  We took skiing trips and I got to know his family and Professor Gingold—what a gift—and it was so great watching his career really take off.”

And what a career it has been, so far, spanning almost four decades.

Born in Bloomington, Indiana, Bell began the violin at age four. At age 14, Bell debuted with Riccardo Muti and the Philadelphia Orchestra, and made his Carnegie Hall debut at age 17 with the St. Louis Symphony. At age 18, Bell signed with his first label, London Decca.

Bell is one of the most celebrated artists of his era. Having performed with virtually every major orchestra in the world, Bell continues to maintain engagements as soloist, recitalist, chamber musician, conductor, and Music Director of the Academy of St Martin in the Fields.

When he takes the stage on October 3rd it will be in recital with pianist Peter Dugan.  Rawls says the audience is in for a real treat.

Rawls is excited for School of Music students to get to experience the performance and participate in a Q&A session with Bell.

“In our world of classical music, he’s one of the few with real “rock-star” status. I think students will probably be pretty starstruck at first then they’ll hear him play and get a chance to talk with him, and they’ll see that he’s just a guy. I hope they’ll gain insight about real-world preparation and what they need to do beyond the practice room. We can talk about those things as professors, but coming from someone who is so well known and widely respected, it will register in a different way.  This will be so meaningful and the students will talk about this for a very long time.”