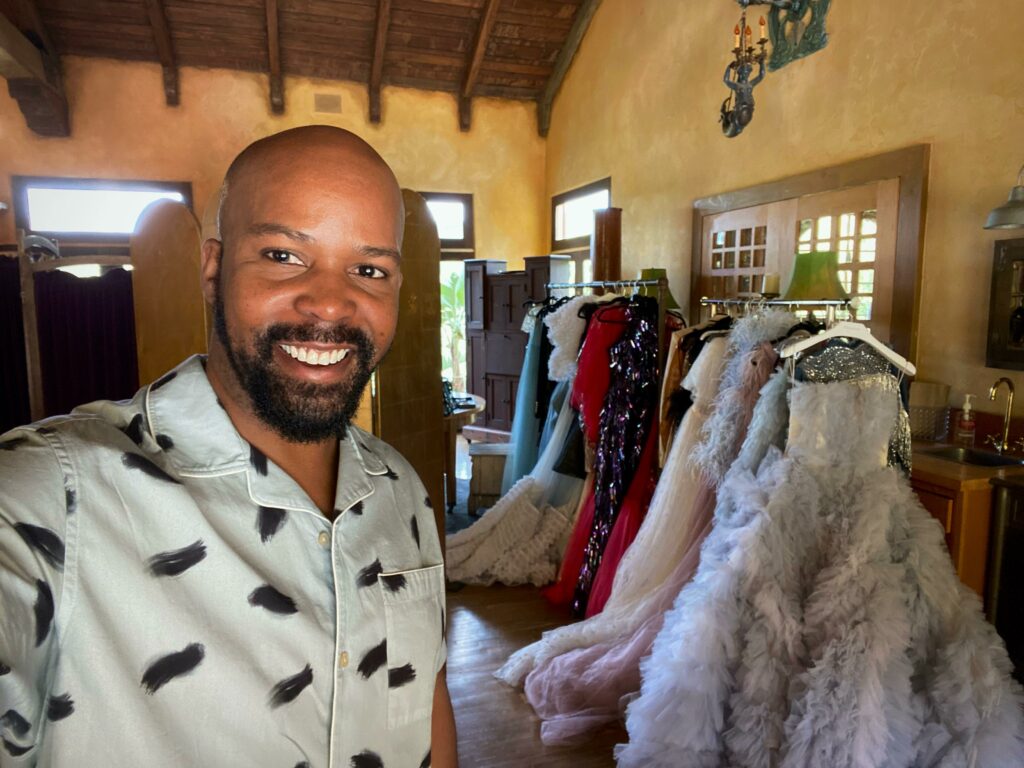 When the 75th Annual Tony Awards aired on Sunday, June 12th, millions of viewers tuned in to see who goes home with the coveted statuette, but that’s not all they were watching.  Checking out what the stars are wearing has become as much a part of the show as learning who gets the awards.

“As a personal stylist I feel like I’m helping people become the best version of themselves.  People need to understand that what you put on your body communicates something to others,  and that ultimately can help you navigate where you want to go with your life. One of the things I tell people is, ‘Say you’re watching Shark Tank.  You see these business people in suits and you take them seriously.  Would you feel the same way if they were wearing jeans and a tee-shirt?  Would you believe in their product or idea as much and want to invest money in it?’”

Fears grew up in Greensboro and attended UNCG where he received a BFA in Acting.  He moved to New York along with several classmates.

“When the first of us got up there they found this tiny apartment on Roosevelt Island. The rest of the group moved up, one person a month, sleeping on that couch until we could find a place. UNCG is where I made some real, true friends and a career network.  We’re all still in touch.”

It wasn’t long after getting to New York that Fears decided the theatre auditioning process just wasn’t for him, so he refocused his creative energy.

“I’d always been interested in fashion and wanted to be a designer but I couldn’t really draw. And being in North Carolina, how many times are you introduced to designers? I would just see it on television.”

Fears decided to pursue fashion hosting and began finding ways to get invited (and sometimes just sneak in) to Fashion Week shows.  He used a hand-held video camera to document his experiences and got interviews with designers like Tommy Hilfiger and Rachel Zoe.

“I drew on some of that acting training I got at UNCG,” he says with a smile. “ I wasn’t a stylist yet, but I sure was acting like one. Sometimes you just have to fake it ’til you make it.”

Fears soon expanded his fashion hosting to include styling and art direction, becoming part of the developmental creative team for Ladygunn magazine. He decided to move his base of operations to California where he is the Fashion Editor at Sheen magazine and host of “The Journey” on Sheen Talk Live.

Even though he’s not in theatre anymore, Fears says he feels he’s completely using his degree.

“When I was acting, I always felt the closest to the character when I was in costume.  I started to embody that person.  Think about how if you’re wearing a military uniform you feel more rigid.  If you’re wearing a hoodie you feel more casual, more approachable.  I use that knowledge to help me with personal styling.  I do a lot of magazine styling too and it’s the same thing there.  You’re putting on a little show, a mini-play, a vignette when you do a photoshoot.  The only difference is that it’s just visual. When you’re doing editorial styling for a magazine you need to consider the readership. The magazine is likely read by a specific type of person who lives a certain way and likes certain things.  So you dress the person in a way that the reader aspires to that style and, in turn, feels the need to get the product that’s being advertised.”

In the area of personal styling, Fears says business has been growing, especially since people have begun returning to the workplace. He was interviewed by Time magazine in 2021 for the article “The Return to the Workplace Means New Rules for Office Dressing.”

“I tell people if they’re going in for a job interview, dress for the job you want.  It’s really about telling a story and understanding how you want to be seen and what the clothes mean. I think we tell a story everytime we walk out of the house.  A suit, a hoodie, glasses – they represent something.”

Fears points to a man in the restaurant where he is being interviewed:

“See that guy over there? He’s wearing a maroon colored hoodie and a ballcap. I automatically think he seems sporty and those must be his friends and this is a social situation because he’s so casually dressed.  It’s a quick, almost involuntary, information grab. My assessment may not be accurate, but it’s what our minds do.  We decide if we can trust someone; if we can relate to them; if they could be threatening – all based on how they look.”

Fears has built a one-man business that includes personal styling, celebrity styling, e-commerce styling and hosting. He attributes that to the reputation of his work and his confidence, a lot of which he says he gained at UNCG:

“I felt like the faculty believed in me. Marsha Paladin was so good at making you feel comfortable in your skin, and she could see everyone’s gifts.  Jim Wren is a master at helping students live up to their potential. He was supportive but he didn’t coddle! John Gulley gave great pep talks. I learned how to talk to just about anyone by understanding how different people communicate and what their motivations are.. That’s a huge gift. You just learn a lot about life in the UNCG Theatre program.”

Fears’ work is getting noticed in the industry.  He is the finalist/runner-up in Glamour magazine’s web series “Dress to Kill”, and he is a nominee for  Sheen magazine’s “Kimmie Award Stylist of the Year.”  He styled Krystina Arielle (known for web hosting for the Marvel and Star Wars franchises) for the red carpet premiere of  Angelina Jolie’s movie The Eternals, a gig he says garnered tremendous exposure because “those photos went everywhere!”

Fears believes the fashion world is a perfect fit.

“With styling I can still perform in a way and create characters and stories.  And it’s all on my own terms. It’s not up to a casting director to decide.  This gives me such creative license and I love it.”

The chunkier shoe is in now. The sneaker is evolving – it’s not just for running anymore.  You see people wearing sneakers with suits.

Clothing is reflecting a need for comfort.  People are wanting to dress up now and get out, but they’re really wanting comfort now.  We’re seeing men’s pants with elastic in the waist.  We’re seeing fabrics that have a little more give. There are blazers with more casual cuts..

We’re seeing a crochet and knitting sort of vibe, also the patchwork look.  I think that’s also about comfort and the fact that people had a lot of time during COVID and got into knitting again.

Jewel tones are coming back. Vibrant colors. People want to have fun with color.