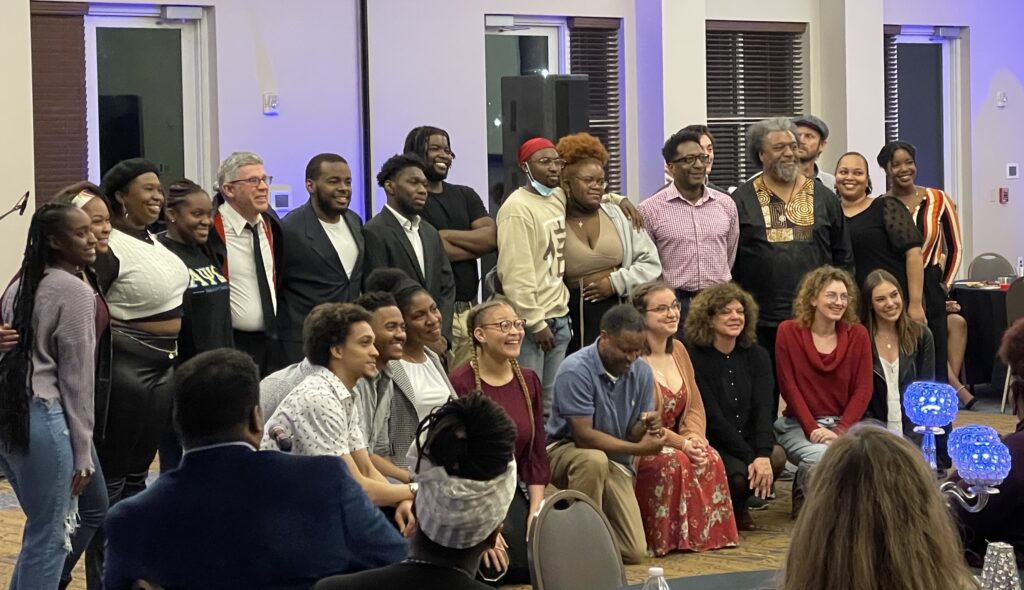 In the summer of 2020, after the May 25th murder of George Floyd and as cities across the nation were rocked by protests and demonstrations, theatre artists and administrators at Greensboro’s colleges and universities began a conversation about how to channel the emotional energy into a common project that would honor the activism of their students. That dialogue led to the creation of Amplify: Black Voices Festival of Greater Greensboro, a project supported by a $20,000 grant from the National Endowment for the Arts and being presented April 8th–May 1st by the Greensboro Consortium of Colleges and Universities.

Committee Co-Chair Anne Hayes says it’s the first time the consortium has collaborated in this way:

“It all started with a remarkable group of department chairs who were committed to elevating stories and voices from the Black community. There were too many stories to tell for a one weekend performance, so it needed to be bigger. We decided if we collaborated, we could offer four shows over four weekends—a full festival.”

Natalie Sowell, Director of UNC Greensboro’s School of Theatre, says the goal was to bring people together to address an important issue:

“It’s about coming together to think about how we center the stories of the Black experience, pay attention to our students’ desires to be heard and really hone in on Black Lives Matter. We have lots of possibilities and potential if we share resources and bridge across the colleges and universities.”

Sowell points out that although the coming together stemmed from the Black Lives Matter movement, this Festival reaches far beyond:

“Our theatre students are very clear that they want stories that are not the stories that normally get told. Our Black and Brown students are saying what about us, how can we share our narratives, and where are the opportunities for us to be on stage? Having a festival is a good way to facilitate that. And this festival is not an end point. It’s a springboard into consistent collaboration across the colleges and universities to make sure that we are attending to the stories of what is really about half the population of Greensboro. We need to keep telling those stories.”

Sowell says working this way will give students real-world experience:

“They’ll be working with other faculty, directors, and professionals around the area. It’s important for them to do auditions and callbacks with others. Folks do things differently in different places and part of the challenge with training in one area is that you don’t necessarily get the experience of different ways of working and also the different styles of theater. We’re very focused on contemporary realism at UNCG but one of the pieces in this festival—the one Bennett is doing, which is written by Distinguished Alumnus Ed Simpson (year, degree) and who teaches at High Point—is a little bit more like choreo-poetry.”

“Nick and the Prize Fighter is about an aging playwright and former boxer, the daughter who is taking care of him (both Black), and a young, white man who wants to help the dad finish his last play. It raises a lot of questions about whose voice gets to be centered in stories and how you preserve the sanctity of your creative work. It’s a beautifully human story with a lot of the questions that we struggle with in theater about who’s telling the story and whose story it is.”

This will be the premiere of Nick and the Prize Fighter, and Bush will attend a performance and do a mini-residency with students doing workshops.

Sowell says even though progress has been made in the area of gender and race inequities in the arts, there is still so far to go:

“We are not nearly where we need to be. We’re taking baby steps if we’re honest about it. But we’re further along than you know second wave of feminism where it was very, very difficult to find a woman who was directing or to find female-identifying people in the field of technical production. One of the joys of doing this festival is that students will get to see some other people at the helm. Within the festival there are two Black women directing, and there are women who are producing the festival, you know we’re kind of running the show, which is fantastic.”

Sowell stresses the importance of her students to see women in leadership roles:

“I also think it’s super important that I’m the Director of the School of Theater right now. We’re in our one hundredth year, and I’m the first woman and the first person of color in this role. And it’s about time. It’s really difficult to think about the fact we’re still talking about those kinds of firsts. I really thought that we’d be further along. We’re not, but we’re making strides.”

Sowell says she’s proud of the role her students have in making a difference:

“You can see that things are changing, but things don’t change because people sit back and wait for them to change. They’re changing because people are demanding that they change. And it’s really interesting to see this generation of students and how they are really focused on making shifts and changes so that the work that they’re doing has different kinds of meaning. We’re calling them ‘Artivists.’”

Sowell tells her students to keep the ideas coming and to think of ways to put them into action:

“I say put some feet on those ideas. It’s not only up to us as the adults in the room to make things happen. There are a lot of things they would like that are not possible as quickly as they’d like, but part of the satisfaction of this is figuring out together how to make a plan for change in this academic setting.”

Sowell feels like the willingness to change feels very different than two years ago:

“I think people’s eyes are open, and they’re more willing to engage. I also think that these young people are not willing to let people disengage. I think we’ve moved away from the concept of colorblindness and thinking it doesn’t matter who’s teaching or who’s in the room. It does matter who’s on stage, the material that we’re reading matters. The voices at the table matter. If we want to pay attention to what it really means to be inclusive, then we have to do the work right. And it is that—it is work.”

Amplify: Black Voices Festival of Greater Greensboro will run for four weekends in April. Through post-show discussions, the attendees will be invited and encouraged to engage in collective action to build a more inclusive and respectful community. For tickets, visit https://gsotheaterconsortium.com/.

Nick and the Prizefighter