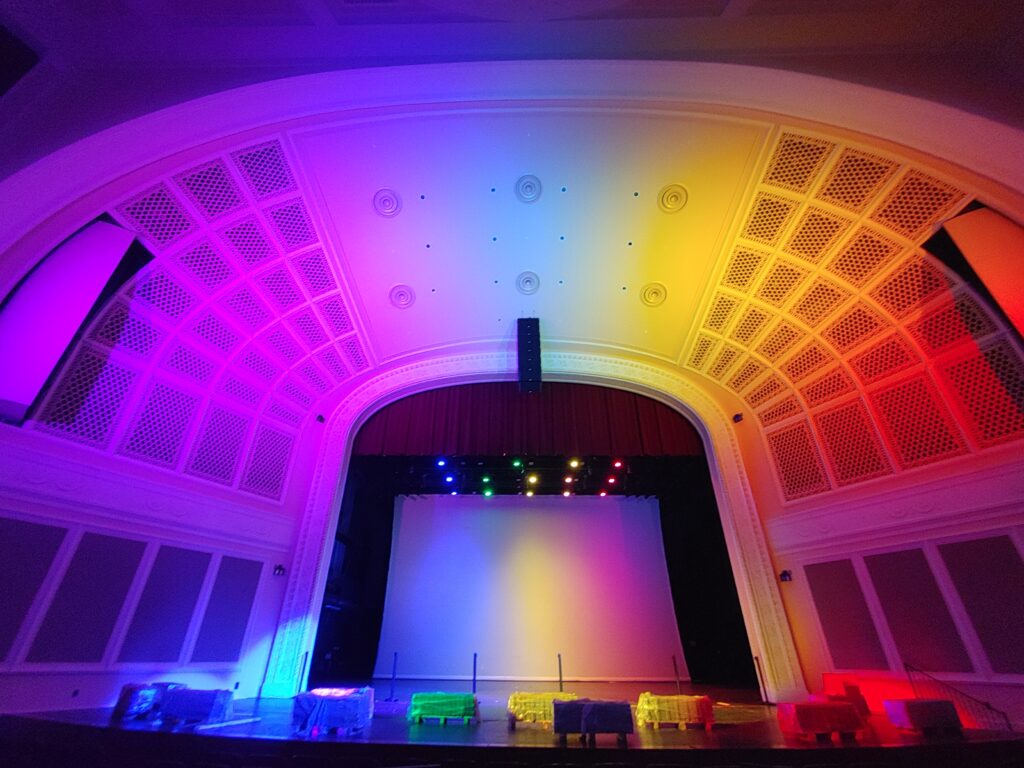 When the lights come up in UNCG Auditorium this season, they bathe the stage in the deepest colors and brightest whites imaginable with illumination reaching every corner of the stage as a new set of LED stage lights makes its debut.

The lights were installed last spring and paid for by a grant from the Office of Sustainability’s Green Fund, which supports projects that help meet the goals of the UNCG Climate Action Plan. The grant was initiated by Scott Garrison, Technical Director of the UNCG Auditorium.

Garrison had worked with LEDs before (the Auditorium already had a few), and he knew what they could do for design:

“There is so much to love about them. One is how much light gets to the stage with such deep colors. At a distance, an incandescent light would lose most of its visibility with intense colors, but with these fixtures, a deep blue shines as brightly as a white light. Designers will no longer be confined to a single color choice; they are free to quickly switch between colors to find just the right shade to evoke a reaction or perfectly enhance a performer’s skin tone without washing them out.”

Garrison also knew that, while expensive, LEDs are more energy and cost efficient. It was during conversations with CVPA Assistant Dean for Budget and Operations Brigette Pfister and Auditorium Production Manager James Goins when the proverbial lightbulb went off for Garrison:

“The Sustainability Office seemed like a logical place to start and that’s where I learned about the Green Fund from Sean MacInnes. Then I reached out to Facilities Operations, and Dr. Nihal Raees was able to get the data on power consumption. It turns out that the area of the Auditorium that had already been converted to LEDs had experienced a dramatic reduction of 100,000 kilowatt hours a year!”

Garrison says he was a little intimidated by the paperwork—he’d never written a grant before—but with support from Pfister and Goins, the grant was written, and the full request awarded for eighteen lights at a cost of $21,500.

Pfister says the lights add value to the UNCG Auditorium in a multitude of ways:

“In the past, we have had to rent equipment, sometimes at considerable expense, to provide appropriate lighting for some of our high profile guest artists. Lighting designers working in the Auditorium were limited by the equipment available in the facility. Now, thanks to the Green Fund, that’s no longer the case. Also, UNCG is estimated to save around $10,000 annually in utility costs because the new LEDs are so much more efficient than the old incandescents. The benefits include better lighting for our guest artists, better outcomes for our lighting designers, more exciting experiences for our patrons, and more sustainable operations overall.”

Garrison says lighting is an an important element of the UNCG Auditorium experience:

“Lighting is critical to storytelling onstage. It has the ability to define a scene’s time of day, to underscore a dramatic moment where the characters’ lives have been changed, to evoke emotional reactions, or to point an audience’s focus away from crew members changing scenery. LED technology is one of the best investments that any performance space can make. My goal is to replace all of the hot burning incandescent light fixtures in the Auditorium before the end of the decade, and thanks to the Green Fund, we have taken a giant step towards that goal!”