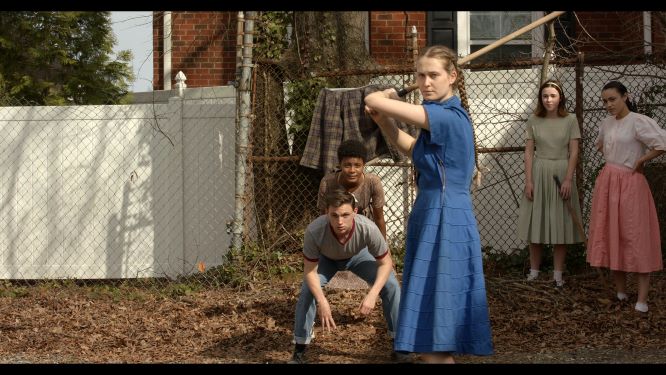 Flatbush Avenue tells the story of three young women in 1955 who, like the rest of the neighborhood, are obsessed with the then-Brooklyn Dodgers. The girls’ lives are changed forever when they are challenged to play a game of street stickball. Along the way valuable lessons are learned about community, raising your voice in the face of injustice, and the enduring power of female friendship. Radio: A Musical Ghost Story follows Lowell, a young woman who encounters a ghost in the showers of her gym while reeling from the recent loss of her brother. It sings strange static to her only made comprehensible through her headphones – but is it a beckoning call or a warning?

Erin Farrell Speer, the director of Radio and producer of the Spartan New Musicals describes how the films were created:

“Spartan New Musicals was designed as an alternative ‘lab’ experience for musical theatre majors here in the School of Theatre. Like all other musical theatre programs across the country, we have had to modify our lab experiences for the health and safety of our students during the Covid-19 pandemic. For spring of 2021, we felt that a fantastic alternative to stage production would be to commission three original musicals made specifically for film, written with our students in mind.  In keeping with our desire to amplify the voices of marginalized writers, these new musical films would be written by artists who are heavily underrepresented on musical theatre writing teams, especially on and around Broadway.  Dominick Amendum (coordinator of Musical Theatre) and I identified three different writing teams we had a connection with, whose ongoing work we were excited to support and whom we felt would deliver projects that could challenge our students.”