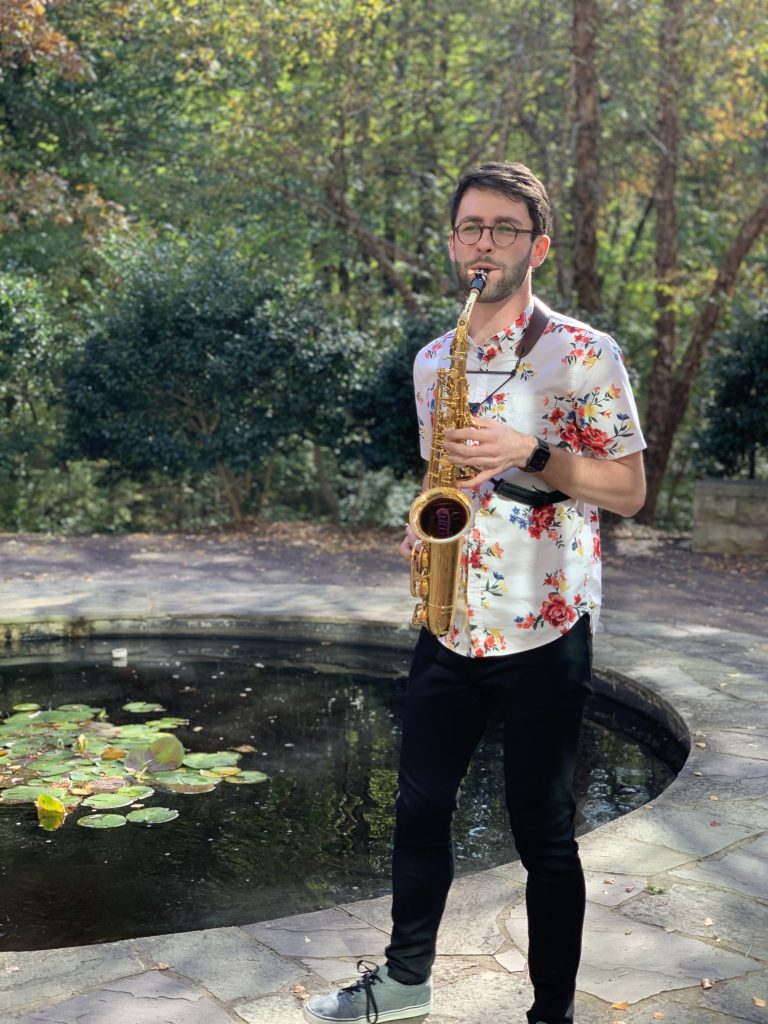 Tucker Daniel says he speaks three languages — his primary English and the two that he studied at UNC Greensboro, Spanish and Music. Daniel’s primary degree is a BM in performance — he plays the saxophone — but he says getting his BA in Spanish has also played a considerable role in his development as a musician:

“The idea of communicating with others in a common language is so important. I want my performances to be like live translations. I want the audience to hear a piece and walk away understanding what the composer was saying. And the language of music is what makes that happen.”

Daniel learned about UNC Greensboro when one of his sisters attended, and because CVPA’s reputation for musical excellence was touted by teachers and band directors in his hometown of Apex, NC. During his senior year of high school, he received an invitation for a tour from Chad Eby, Director of the Miles Davis Jazz Studies. Daniel says when he arrived at the School of Music he knew he was exactly where he should be:

“I had never been surrounded by such incredible musicians. They pushed me and challenged me to realize that good enough is, in fact, not. I had to work harder than I have ever worked in my entire life, and my music today means so much more to me than ever. I have truly found my way here at the College of Visual and Performing Arts. My closest friends have been made in the practice rooms — talking and laughing while playing duets, sweating and swearing during last minute rehearsals — and I had professors who picked me up, guided me, and nudged me, sometimes in a different direction than I expected. ”

Daniel also found a mentor in Dr. Steve Stusek, Professor of Saxophone, with whom he took private lessons for four years:

“Some weeks I walk into his office and we will spend an hour tearing into the music of Jacques Ibert, Fernande Decruck, or Mischa Zupko. Some weeks we sit and talk about how to make sense of the world around us through books, or music that we know and love. Dr. Stusek has taught me about the wonders of pour-over coffee (add just a smidge of butter!), and he is the reason I have found a truly spiritual relationship with my saxophone. There is no substitute for the time I have shared with him, and he is a huge part of why these last four years have been so meaningful. I will forever be grateful for the time I have spent studying with him and for his presence in my life!”

Daniel says there’s something else he discovered during his time at UNC Greensboro. Something that came as a little bit of a surprise to him:

“I have a newfound love for my home state of North Carolina and especially my adopted city of Greensboro. When I came to college, I was already looking towards my next step out. Now that I am reaching the end of my time here, my heart aches at the thought of leaving it behind. Our folk festival, the community of small, local businesses, Greensboro’s Civil Rights history, and UNC Greensboro’s involvement in the refugee and immigrant community through the Center for New North Carolinians has made me appreciate it so much.”

Oh, and there’s another reason Daniel finds the Triad special. Jazz legend and saxophonist John Coltrane hails from just down the road in High Point. A famous quote from Coltrane goes like this: “Invest yourself in everything you do.” Tucker Daniel echoes something similar:

“Take advantage of everything. Exhaust yourself here at UNC Greensboro. You will be surrounded by a vibrant and truly caring community of educators and artists who want nothing more than to contribute to your wellbeing. Fill every moment of your time with the art, music, and friends that you won’t be able to get from any other part of the world.”