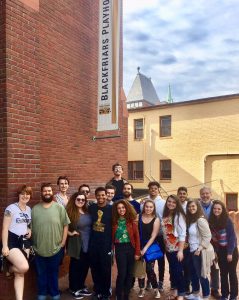 On April 14, 2019 a group of current and former UNCG theatre students traveled up to Staunton, VA, with Associate Professor, John Gulley, to the American Shakespeare Center. They participated in a workshop and saw a production of Henry IV, Part 1.

The students who participated in the trip all have an interest in Shakespeare and a curiosity that was piqued when professor John Gulley made the offer to take the students up to see a performance. It’s no secret that Early Modern English is a challenge for many modern readers. Shakespeare wrote these texts not to be read, but to be performed and heard. One of the things that the American Shakespeare Center (ASC) excels at is bringing these classic pieces of literature to life.

One element the ASC uses to make these shows more relatable to a contemporary audience is by playing popular music before the show and during intermission. For Henry IV, they opened the show with the character Prince Hal singing “This Is How We Do It” by Montell Jordan.  Students also heard  Hotspur perform “DNA” by Kendrick Lamar. Both songs were not only perfectly in-tune with the characters that sang them, but they also thrilled the audience members who knew the lyrics and could sing along.

Jordan Willis, a senior in the Theatre BA program, made this trip because she hopes to one day work at ASC. She has traveled up to Staunton nine times in the last year and has seen over 20 productions.

“I think the ASC is a wonderful organization. I first saw them tour in my hometown four years ago, and I’ve dreamed of working with them ever since. They have an incredible education department that is passionate about teaching about the beauty and life in Shakespeare’s works. That’s a mission I would love to be a part of someday.”

After the show was over, they had a talk-back with ASC actor Benjamin Reed, who played Douglas and other characters in Henry IV. Students were able to ask him questions about life as a professional actor, his experience as a fight choreographer, and more about how the ASC handles Renaissance era staging in their productions.

Shakespeare will never die out or go away. Taking the opportunity to see his work performed live is important as a growing actor, writer, teacher, and director. Seeing the shows performed is the best way to learn; you can sit in a classroom all day long, but it will never be anything like seeing the work of art come to life right in front of you.